That’s the refrain of an Everly Brothers song released in their 1960 album, with lyrics prescient of facts revealed in a 2017 study which discovered one in 13 women reported pain during sex.

But let’s be clear:

SEX SHOULD NOT HURT.

It might be gentle touching that is painful or it could be penetration of the vaginal canal that can cause soreness. Whatever activity it is, it makes for an uncomfortable sexual experience. Yet often women will tolerate the discomfort without complaint, not wanting to let down their partner. They may rationalise that the pain isn’t so bad and they can put up with it.

Whatever form painful sex takes, you shouldn’t just put up with it.

The reasons for dyspareunia (the medical term for painful sex) can be physical or psychological but are commonly a combination of both.

If you have been cleared by your doctor from any medical reason for painful sex, then an assessment by an experienced pelvic floor physiotherapist can often reveal physical changes in your body that may be connected to your pain.

The muscles in your pelvis are no different to the others in your arms, legs and back. They can go into spasm and targeted physiotherapy can release them.

Pelvic muscles that are too tight can make penetration uncomfortable. They also compress nerves and reduce blood supply, which can result in hypersensitive tissue in the labia, clitoris, perineum and vaginal canal.

As well as these changes in the soft tissue, there may be changes in breathing and the action of the diaphragm (the big dome of muscle in the abdomen that controls breathing).

When sex becomes painful, it is difficult to relax and enjoy being with your partner, which brings anxiety, frustration, disappointment as well as sense of sadness and loss. And it can become a vicious circle because these emotions can create even more tension in the muscles.

Targeted physiotherapy treatment can help reduce the muscle tone so that it’s not over-tight, and it can mobilise and desensitise nerve tissue. Help to retrain breathing and to rebuild confidence can result in supported return to pleasurable sexual activity.

No less than 6,669 sexually active women aged between 16 and 74 took part in the study that found that one in 13 women experienced painful sex (the third National Survey of Sexual Attitudes and Lifestyles).

They were asked if they’d experienced painful sex for a period of three or more months…so that one in 13 figure isn’t just about a one-off experience, or even occasional pain.

The study, published in the British Journal of Obstetrics and Gynaecology, also found that other difficulties lasting three or more months included:

One thing can lead to another, so these problems can lead to painful sex, or they can be complications of it.

With careful assessment, a customised physio programme can be developed to address the symptoms of pelvic floor pain and allow women to sing love doesn’t hurt any more.

Bill is a Fellow of the Canadian Academy of Manipulative Therapy and holds a Masters Degree in Physiotherapy from Queen Margaret University, Edinburgh. He is also the lead physio at The Scottish Ballet, and contributes to the Masters programme in Dance Education and Science at Edinburgh University. 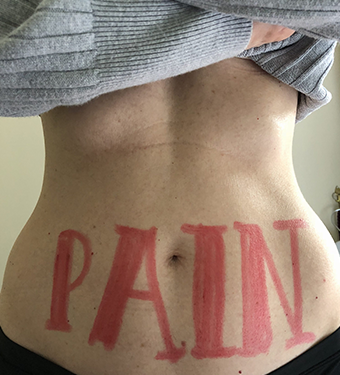 Women’s Health Concern (WHC) is the patient arm of the British Menopause Society (BMS). We provide an independent service to advise, reassure and educate women of all ages about their health, wellbeing and lifestyle concerns. A key objective is for women to forge a closer relationship with their general practitioners, nurses and other health professionals.
Donate